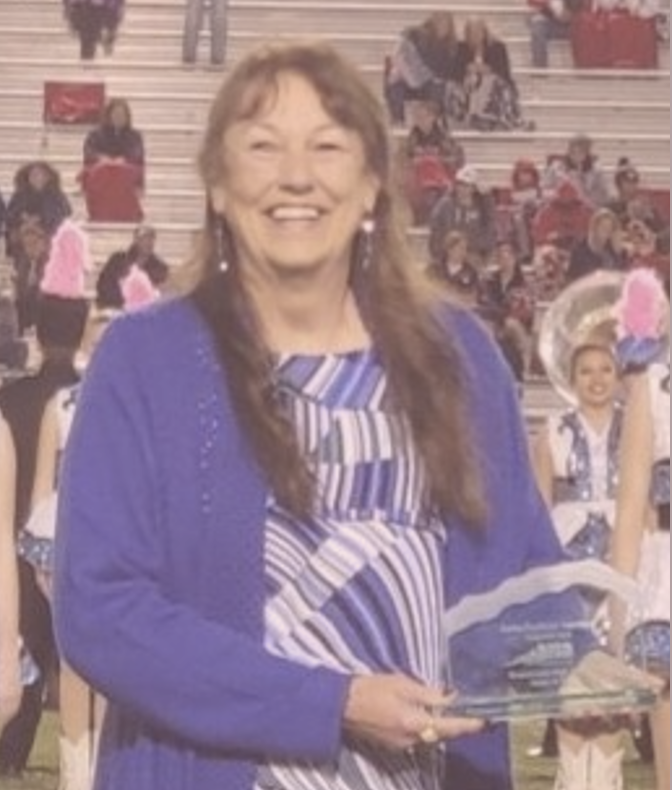 WALL OF FAME RECIPIENT FOR 2021

Kathy Faulkner Garrison grew up a Clute girl, attending Clute schools. Kathy was the first of 5 Faulkner’s that would Graduate from Brazoswood High School As part of Brazoswood’s first-class, Kathy set some of the school’s first – she was first to make the all-Brazoria County girls basketball team, the All-District volleyball team, and Brazoswood’s first female team to win a district title!  Kathy and her fellow female athletes named the girls’ athletic teams the Buccettes!  A name that was used for all Brazoswood female athletes for more than 20 years. Kathy was involved in many organizations at the new Brazoswood High School, but her participation and dedication to the Brazosport Junior Achievement program garnered her much recognition and eventually a college scholarship. After walking across the platform with her Brazoswood High School Diploma, she chose to attend the newly constructed Brazosport Junior College on scholarship, playing basketball and volleyball for the school. With time on her hands, she also played softball with the Freeport Chargers Women’s American Softball Association and traveled throughout the U.S., including Mexico– winning many trophies and titles. She received her Associate of Arts Degree from Brazosport Junior College in 1973.

From there she headed off to Stephen F. Austin University to play basketball and softball for the Ladyjacks – through scholarships – a Junior Achievement Scholarship, Academic Scholarships, Athletic Scholarships for softball and basketball; along with a Scholarship in Electrical Engineering. Mrs. Garrison earned her Bachelor of Science Degree with a Major in Elementary Education and a Minor in Physical Education and Math. From Lumberjack Country, she hit the ground running; beginning her teaching career for Clarksville ISD. She has been a teacher at DeKalb ISD, James Bowie ISD, Idabel Public Schools, and Detroit ISD.  She has taught English, Math, Special Education, and Physical Education along with Coaching Basketball, Volleyball, Softball, and Track.  She has also been a Drill Team and Cheerleader instructor which kept Kathy busy. She was not so busy that she didn’t have time to meet Clarksville native, Lee Garrison. They met in 1975 and from there, Kathy set off to teach, coach, and impact the lives of as many children as she could.  She did all of this while continuing to play Semi-Pro women’s softball, traveling around the U.S. during her summers and breaks from school, and again winning many trophies and titles. But Kathy’s real focus was on her students, those in her classroom, and those on the court. Garrison’s students were successful and the teams she coached were winners, on and off the field. She was named Coach of the year 11 times by her peers, and her campuses named her Teacher of the Year 7 times. She was the District 18-A Cross Country District Chairman, the District 18-A Softball District Chairman, named as a Basketball All-Star Committee Member, and was a very active member of the Texas Association of Basketball Coaches. Garrison was appointed by the Texas Commissioner of Education to serve on the UIL State Executive Committee for three consecutive years.

With Lee’s support, Kathy chose to expand her focus and work in schools where she felt that she was most needed, collecting numerous ‘God-children’ and thousands of her ’kiddos’ along the way. This meant that although she officially resided in Clarksville, Kathy traveled and stayed in communities where she felt she could make the most impact, often pulling an RV or other mobile home away from home – all with the love and support of her husband Lee. To better meet the needs of her students, Garrison continued to learn and to grow as an Educator. She earned a Master’s Degree in English from East Texas State University, acquired her Special Education Certification, then her Mid-Management Certification from Texas A&M, and finally, her Superintendent’s Certification, also from Texas A&M. Mrs. Garrison’s varied and extensive background in public education as a Teacher and Coach prepared her for her next steps into School Administration.

Kathy was very active with the Texas Association of Secondary School Principals, where she served on the Staff Development Planning Committee and was active on the Committee of Student Affairs. Kathy Garrison served as Superintendent of Schools for two school districts. First, serving Valley View ISD in Cooke County as its District Leader. Then, Superintendent Garrison went on to Tom Bean ISD, where she oversaw several campus and district recognitions from the Texas Education Agency. During her tenure, the Middle School was chosen by the Texas Middle School Association as a State and National "School to Watch.” Her District received the “Texas Cool School Grant” in the amount of $982,000, and passed a bond to build a brand new Elementary School. After much thought, Kathy chose to retire from Texas Public Education in 2014, heading back to Clarksville, her permanent home base. However, Kathy quickly became restless and jumped back into public education. This time, just a few miles away from home, but in Oklahoma, where she continues to teach 5th grade Math to students in Idabel Public Schools.

Throughout her time as an Educator, Kathy chose to also be involved in the communities that she served. She was a member of the Lions’ Club, longtime Rotarian, served as the Chairman of the Muscular Dystrophy Association Fundraiser, was chairman of the St. Jude’s Research Hospital Fundraiser, was Vice President of the Red River County Child Protective Services, and currently serves on the Oklahoma Council on Law Enforcement Education and Training and many, many more! Mrs. Garrison has dedicated her entire career and life to serving children most in need.  As a matter of fact, after almost 47 years in public education, she continues to serve students in need of her guidance, her knowledge, and her love. Her life-long mission was to honor the most precious gift life has to offer – YOUR CHILD!! Kathy Faulkner Garrison truly exemplifies the purpose of the Brazosport ISD Wall of Fame – she has truly attained a high level of achievement in her field – the field of Education, and she has made significant contributions through her service and leadership in the schools in which she served and the lives of students she has guided.